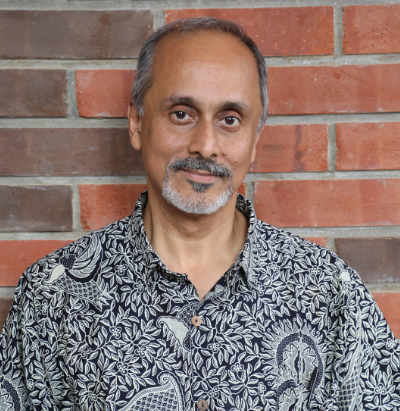 Gautam I Menon is a Professor of Physics and Biology at Ashoka University. Prior to joining Ashoka, he was a Professor with the Theoretical Physics and Computational Biology groups at the Institute of Mathematical Sciences, Chennai, where he was the founding Dean of the Computational Biology group. He is currently an adjunct Professor in the Department of Biological Sciences at the Tata Institute of Fundamental Research, Mumbai, India.

He completed a BSc. (Hons) in Physics at St. Stephens College, Delhi,  an MSc from IIT Kanpur, and a Ph.D. from the Indian Institute of Science, Bangalore. Following post-doctoral work at the Tata Institute of Fundamental Research in Mumbai and the Simon Fraser University in Vancouver, Canada, he joined the Institute of Mathematical Sciences.  His research work, spread over approximately 80 papers, covers a range of areas in both physics and biophysics. He has written several articles on the interface of science and  society as well as on science policy.

He was awarded a DST Fast Track Fellowship for Young Scientists in 2002 and the Swarnajayanti Fellowship of the DST in 2005. He was named a DAE-SRC Outstanding Research Investigator in 2010. He was named an Outstanding Referee by the American Physical Society in 2012, as well as recognized as an Outstanding Reviewer of the UK-based “Reports on Progress in Physics” in 2016.  He was a Visiting Professor at the Mechanobiology Institute and the Department of Biological Sciences at the National University of Singapore between 2011-2013.  He has served on scientific review committees of several international  agencies, including the Human Frontier Science Program and the Wellcome Trust-DBT India Alliance. His research has been funded by several national and international agencies, including the European Union, the Indo-French CEFIPRA as well as the DBT, DST and DAE in India. He has lectured in universities and scientific conferences around the world and in India, including in the USA, Canada, France, Germany, Switzerland, Singapore, the Netherlands and the UK. He was elected a Fellow of the National Academy of Sciences, India  in 2019.

He works on a number of biophysical problems including nuclear architecture, axonal transport, collective cell migration and cell adhesion, all in the general field of mechanobiology. The modeling of infectious disease and its implications for public policy is a long-standing interest of his, while the use of machine learning methods in clinical contexts is a more recent one.