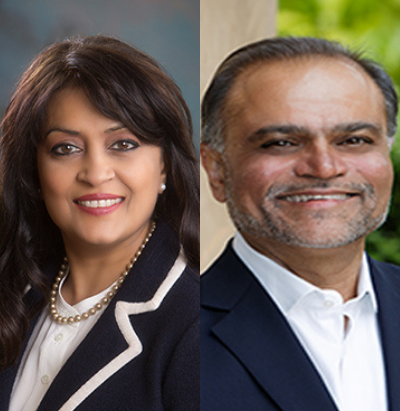 Lata Krishnan is a technology entrepreneur, startup investor and an engaged philanthropist who has extensive experience in finance and business management, as well as in helping both young companies and not-for-profit companies scale innovative ideas to deliver impact.

Lata spent the early part of her career at Arthur Andersen in UK and at Montgomery Securities in San Francisco, where she developed finance skills. She later applied these skills at Smart Modular Technologies, a company she co-founded, and led as chief financial officer through a public offering. As a private investor in the family office, she also helped start Shah Capital Partners.

As an active philanthropist, Lata is the founder, former president and current co-chair of the American India Foundation. She is a board member of the Commonwealth Club of San Francisco as well as a fellow of the American Leadership Forum. Her areas of focus include education, at-risk children and families, cancer research, and economic empowerment of women. Lata is also a senior advisory board member of the London School of Economics and Political Science, South Asia Centre. Lata holds a bachelor’s degree from the London School of Economics and Political Science. She is also a member of the Institute of Chartered Accountants in England and Wales.

Ajay Shah joined the Silver Lake team in 2007, and is currently the co-founder and managing partner of the firm’s middle market private equity fund, Silver Lake Sumeru. He is also the chairman and CEO of SMART Global Holdings (SGH), a publicly held portfolio company of the fund.

Earlier in his career, Ajay co-founded and was the CEO of Smart Modular Technologies, a company that he led through its public offering. Prior to that, he was in senior roles for Advanced Micro Devices and Samsung Semiconductor. Currently, he serves on the board of directors of Velocity Technology, Locaweb, Telesoft Partners, and Alpha Petroleum. He holds a BS in engineering from Maharaja Sayajirao University, Baroda and an MS in engineering management from Stanford University.