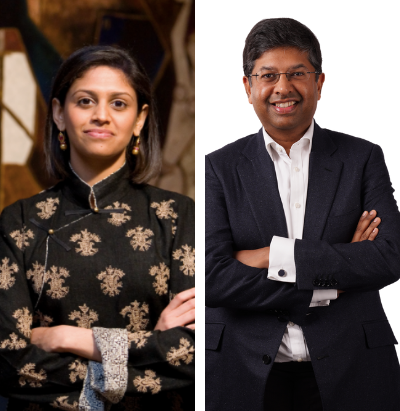 Maithili Parekh is an art historian and philanthropist. Maithili was the director and India head of Sotheby’s, a global auction house, prior to which she worked at Morgan Stanley in New York. She is a visiting faculty to the art history program at the Bhau Daji Lad Museum (erstwhile Victoria and Albert Museum) in Mumbai.

Maithili is on the board of a number of non-profits and museums, including Muktangan, Philadelphia Museum of Art, and the South Asia Advisory Council of Brown University. Passionate about liberal and progressive education, healthcare, and vulnerable child care, Maithili is deeply engaged and committed to the development sector. She holds a BA from Brown University, USA and an MSc from the London School of Economics and Political Science (LSE).

Shashank Singh is a partner and the head of the India office of Apax Partners, a global private equity fund, having helped to establish it in 2007. He serves as a trustee of the Apax Foundation and is the chairman of the non-profit, Dasra. He is also on the South Asia advisory board for Harvard Business School and is on the Vice-Chancellor’s India circle of advisors for the University of Cambridge.

Shashank joined Apax in 2004 in London, where he specialised in tech and telecom deals. Shashank has led or participated in a number of deals, including Azentio Software, Fractal Analytics, Healthium Medtech, Mannapuram Finance, Cholamadalam Finance, Zensar Technologies, Shriram City Union Finance, GlobalLogic, iGate, Apollo Hospitals, TIM Hellas, Weather Investments, TDC, Bezeq, and Synetrix. He holds a bachelor’s degree in economics from St. Stephen’s College, University of Delhi, a master’s degree in economics from the University of Cambridge, and an MBA from Harvard Business School.