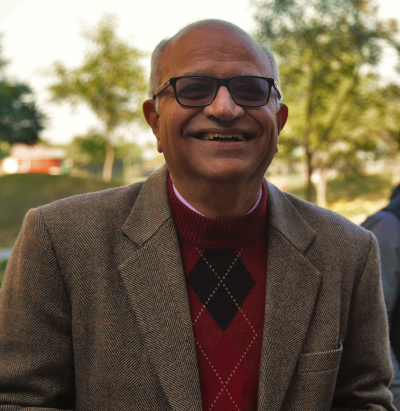 Rajendra Bhatia is Professor of Mathematics at Ashoka University. He obtained his BSc and MSc degrees from the University of Delhi and the PhD degree from the Indian Statistical Institute. He was then a Research Associate at the University of California, Berkeley, and TIFR, Bombay. His long career at the Indian Statistical Institute was punctuated by visiting appointments at several universities across the world.

His books on matrix analysis have become classics in the field, and are cited equally often by mathematicians, physicists, statisticians, computer scientists, and engineers. He is the author of over a hundred research papers which have found applications in areas ranging from operator algebras to brain-computer interface.  According to mathscinet, he is the most highly cited mathematician from India.

He has served on the editorial boards of major journals like Linear Algebra and Its applications, Linear and Multilinear Algebra, SIAM Journal on Matrix Analysis, and the Journal of the Ramanujan Mathematical Society. He is the founder and managing editor of the series Texts and Readings in Mathematics (TRIM) and Culture and History of Mathematics. He was the Chief Editor of Proceedings of the International Congress of Mathematicians, 2010.

He is a Fellow of all the three major science academies of India and of the Third World Academy of Sciences. His major awards include the INSA Medal for Young Scientists, the Shanti Swarup Bhatnagar Prize and the Hans Schneider Prize. He is a Bhatnagar Fellow of CSIR, and has been a National Lecturer of the Universities Grants Commission and a J. C. Bose National Fellow.

He has been Chair of the National Committee on Mathematics for the International Mathematics Union and has served as President of the Association of Mathematics Teachers of India.

The journals Linear Algebra and its Applications and Advances in Operator Theory published special volumes in Rajendra Bhatia’s honour. The following links contain descriptions of his work and its impact.