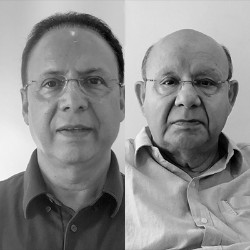 Vir Chopra started his career in Tata Administrative Services (TAS) and then moved to the Sultanate of Oman, where he headed a large family business group that had varied business interests covering hospitality, department stores, computers, electrical and telecommunications networks, and an entire spectrum of home and professional equipment as sole representatives of Philips, Holland. He developed and managed two island resorts in Maldives, ran an ERP software operation, and creatively contributed to Hindi film making through his association with his brother Vidhu Vinod Chopra.

He graduated from the University of Jammu and Kashmir and a PhD from the London School of Economics and Political Science.

Ravi Chopra was the pioneer in starting the biscuit industry in the Sultanate of Oman. In addition to heading the conception and development team, he served as managing director for many years as part of the production team. The company was a success story and became profitable from the second year of its operation.

He subsequently moved to Dubai with a prominent business group and set up a new biscuits manufacturing plant with total responsibility from project inception to final manufacturing and marketing of the production. During his stay in Dubai, he was instrumental in promoting three other companies covering the packaging industry, chocolate industry, and a general trading company. He left Dubai by the end of 2001 to pursue other interests in India. He continues to be an active management consultant to several companies.