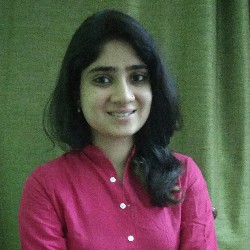 Kavya is an enthusiastic and curious individual who believes experience is the utmost source of knowledge. Hence, her main belief, there is no end to knowledge and learning. She wants to experience and learn as much as she can thus she’s pursued her several hobbies like Classical Dancing, Singing, Dramatics, Creative Writing, Playing an instrument, learning a local (Bengali) and a foreign language (French). Being a graduate in Multimedia and Mass Communication she has recently added writing jingles and short stories, ideating, conceptualising and editing short movies, designing graphics for various events of her college and freelancing to her set of skills. Being an ardent reader, she read her first novel when she was in the second grade and wrote her own stories in the fourth. She owns a library of 400+ hardcover books, and now has moved on to reading books on her indespensable gadget, Kindle.
Attributing to her father’s profession, Kavya is very spontaneous and adaptable to changing circumstances, flexible to new ideas and experiences. She believes in her ‘gut feeling’ that has been responsible for taking the most random but yet the best decisions of her life. She realises her capabilities as a leader and the circumstances and opportunities till today have not proved otherwise. She was made the School Prefect and the lead of the school choir despite being a new student, was awarded the Principal’s Choice Award in School, was the only graduate to be offered a direct placement from India Today and managed the Dramatics Society of the College as the President despite several adversities. She has been receiving awards for academic excellence in most of her school life and has been a First Division holder throughout College with a Distinction in the last term. She is also a French Language Diploma holder with an all-over First division.
She manages her relationships well with family, friends and acquainted peers. Being a people’s person, she is empathetic, loves to talk and is an anchor to people. She is an organised individual, who believes her strength lies in her ability to manage time and prioritise things.
She always felt that she has to do something for a social cause. She hence wants to become an advertiser beyond borders, create social campaigns and advertisements that can move people, help aware and educate them, effect them in a way to create a movement and inspire them to rise for the concerned cause.
She has a vivid imagination and sometimes she believes she is being too ambitious but yet she wants to work hard for pursuing what she feels passionate about. For her, the Young India Fellowship is a platform where she can put her dreams into action, provoke her curiosity and insatiable hunger for knowledge and become a thinker who is not bound by the obvious concerns but yet realises possibilities beyond that.
Favourite Quote: “What is meant to be, will be.”